One of my friends requested an MGMT headband for his girlfriend about 3 months ago. I finally had enough time and motivation to sit down and knit it this week. I finished last night and blocked it... and of course now its too big since I knit it in Malabrigo and it stretched out tremendously. I can't decide if i want to chop it in half and sew it back together smaller or if i want to cut a hole and thread a thick peice of elastic through it. I'll figure it out. I've had about 15 requests for a pattern so suppose i should throw one together and post that on ravelry. 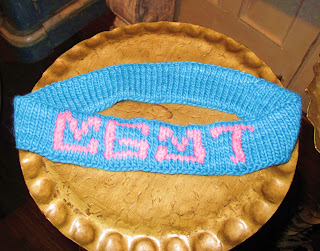 And then I started a little beret for myself in anticipation of the freezing temperatures I'm sure to encounter when I come back home for Christmas. I don't know how warm a superwash sock yarn hat will be, but at least I'll look cute? I started with 8 rows of knitting through the back of the stitch 1x1 ribbing and just switched to the stockinette which will be 2 rows of turquoise, 2 rows of gray. 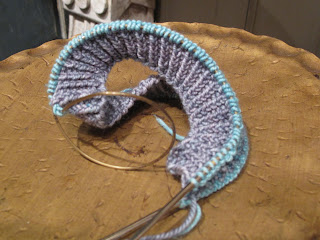 I'm also closing in on being done with an old man sweater I've been knitting on for the past 5 months, but more on that when i take a few photographs. Hopefully it won't be another year and a half between posts.
Posted by Caro at 2:56 PM