I was busy watching tail lights

Here's what happened,
We closed up the shop last Friday evening and I proceeded to several different hurricane parties. Hurricane parties are where everyone brings all the perishable food or alcohol they have in their refrigerators to a central location and commences drinking/eating/speculating on whether or not the storm will hit. After a little drunken deliberation (yes, I do live in the Quarter, but I was already without power and damn is it hot without air conditioning) I decided to leave.
I woke up Saturday morning with one monster sized hangover and had my last New Orleans meal at Camelia Grill. I drove back to my apartment so I could pack up and get on my way to Dallas. The Quarter was eerily quite, but there were still some die hard gay couples walking the streets. This past weekend was Southern Decadence, which is essentially the gay Mardi Gras. I didn't get any pictures but I saw gold and silver lamé everywhere I looked.

Once I cleaned out my fridge, closed my storm shudders, and had sufficiently packed my car with three boxes of wheat thins, water, coffee drinks, and any clothing or yarn I couldn't live without, I got on my way to my kickball coaches house. I dropped off everything that was left in my fridge, frozen chicken, cheese, and ranch dressing (and a few lean cuisines, though I'm not sure what he did with those). He was having a Hurricane Party later that night and then staying through the storm so he needed as much food as possible (he did end up leaving after hearing Nagin's "Mother of all Storms speech")

I then drove over to the West Bank to my friend Beth's sister's house. Their family was kind enough to let me Carravan with them to the Dallas/Ft. Worth Area. I showed up at their house around 8pm and attemped to take a nap, but was far to anxious to sleep. I ended up playing cards and knitting with Beth and her cousin until we decided it was time to leave at around 1:30am. We drove with realtive ease until we got past Orleans Parish and then slowed to a crawl. I was already starting to crash and we weren't even out into the Bayou yet. Traffic sped up after a while, and I staid awake by bouncing around to bad pop punk music. Once we passed Baton Rouge we stopped at a Waffle House and Beth's boyfriend Greg drove for about an hour while I took a nap. When I woke up it was light outside and HOT. They had started contraflow, which is a great idea in theory, but it basically takes a two lane highway and makes it into a four lane highway (which no one can get off for about 40 miles) and then turns it back into a two lane highway. It is desgned to get people out of the immediate damage area, but it just creates even worse traffic when the two lanes need to merge back together again. 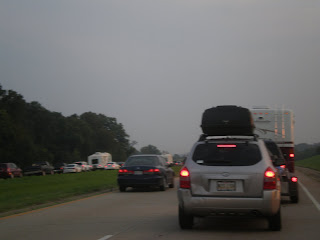 So, in short. I got to Dallas. It took me 16 hours and I was awake for most of two days, but I made it. I had a great time there and spent Labor day at a pool party once I realized that watching the news was only freaking me out more. So I indulged in three of my favorite things, water fights, deviled eggs, and Coors Light and had a great time. 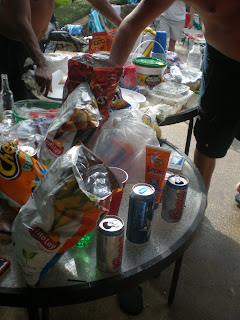 On Thursday morning I decided it was time to drive home. Beth and her family had gotten back Wednesday night after the ban on letting people back into the city had been lifted, and they said that it was safe to come back. So I drove. And drove and drove. I made great time until I hit Lafayette and had to start heading east on I-10. Traffic slowed to a crawl before every exit and didn't pick up until well after the on-ramps. I'm pretty sure that this was because there were rumors flying rampant that gas and food were very scarce in New Orleans and the surrounding areas. I also saw a lot of these: 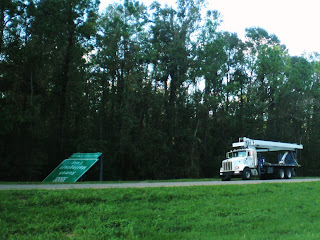 Flipped over exit signs... but only in the westbound lanes. I'm not sure if these were remenants from Contraflow or what, but there were at least 20 of them. I finally made it back into the city at about 8 o'clock that night and headed to Avenue Pub. One of their regulars had picked up 300 frozen hamburgers for them on their way back into town and they were serving hot Cheeseburgers. As my first meal all day that didn't consist of Ranch wheat thins, I ate that sucker with gusto and then went on a mission to find my cat. She had staid out the storm at the shop I work at, along with the other three shop cats, a blind dog someone had rescued, and the two guys that live in the back of the shop. I grabbed her, and some cat food from my apartament which was fine, just very very dark, and then immediatly headed back to the Lower Garden District and fell asleep on a friend's couch.
Yesterday morning when i woke up I went back down to the Quarter and walked around a little bit. Most of the stores were still boarded up but there were a few tourists walking around amongst the heavy presence of National Guardsmen and Police Officers. 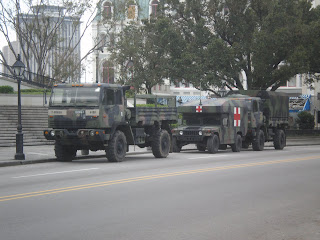 This picture was taken this morning across from Jackson Square. I'd say the amount of National Guardsmen with HUGE guns is a little weird, but I think that is only because it is so very reminicent of post-Katrina New Orleans (I also saw one showing off his gun to drunk college kids outside of a bar). Last night I went all the way uptown for a dinner party and even St.Charles Avenue is littered with tree branches and many of the neighborhoods are still without power. I read somewhere that 250 of the 450 stoplights in Orleans Parish are working. I drove by my old house and the tree in the front lawn had been blown over. This was one hell of a storm.
Anyways, I decided to open up the shop today, as I would like to return to some sense of normalcy (and earn some money). I've had about five or so couples walk into the shop. Everyone is very friendly, and many have interesting storm stories. I just want to say that I am thankful that I got through this with relativly little heart ache and that I think the city did a great job evacuating people.
Posted by Caro at 12:46 PM