I'm knitting a sweater and its neither blue nor red.

Which is so very unlike me. This is the first sleeve of the Central Park Hoodie. I think I started it some time last November. I have the back and I thought I had both fronts done but I can only seem to find one of them. The yarn is Malabrigo Worsted in some sort of green, though I don't know what kind because the owner of the Quarter Stitch doesn't like the way the tags look and pulls them off. Have you ever heard of such a thing? I only forgive her because she has such a large stock of it, even after that factory fire Malabrigo had. 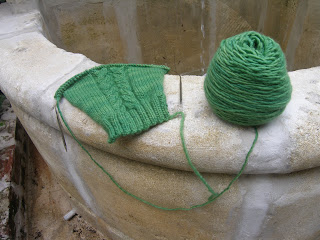 I starting pulling the yarn from the bottom of the ball. I hate when I do that. 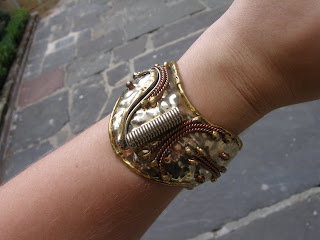 Last Saturday was Dirty Linen Night. It's the more low rent version of White Linen Night. Most of the galleries and shops on Royal Street stay open and serve cheese and jambalaya and drinks. I was quite pleased to find out that my shop was going to be closed, so I was able to participate. It gave me a great opportunity to go into all the shops on Royal Street that I usually just pass by on my walk home. Anyways, I bought this bracelet at a shop called the Latin Quarter. It was made by someone in Argentina I think. It's pretty freaking cool, but makes my hands smell like metal.

Oh, and my fingers are healing nicely.
Posted by Caro at 12:18 PM